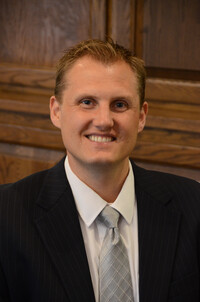 Jonathon J. Kragh is a licensed Funeral Director and Embalmer in the State of Wisconsin, and has held a National Funeral Director license since 2016. He is a graduate of Little Wolf High School in Manawa, Wisconsin, and attended Lawrence University and the University of Wisconsin-Stevens Point before moving to Arizona. There, he met his wife, Ashton, and they got married in 2014. He attended Mesa Community College, earning an Associates of Arts degree in 2012, and a Mortuary Science degree in 2013. He continued his education with psychology classes at ASU before moving back to Wisconsin in 2017 to join the Wieting family in Chilton.

Jon worked at funeral homes in Phoenix, Peoria, and Payson, Arizona, through his internship on his way to becoming fully licensed. He and his wife decided to leave the large cities and desert landscape for an opportunity to be more involved in their community and start a family. In 2019, they welcomed a baby boy, Maji. Jon and Ashton bought a house built in the early 1900s and spend lots of time working on projects around the house and in the yard, as well as visiting the nearby parks with Maji.