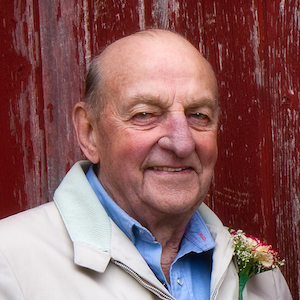 Arthur J Hoerth
Chilton, WI
Arthur J. Hoerth, age 98, of Chilton, died on December 10, 2022, at Ascension Calumet Hospital in Chilton. He was born March 31, 1924, at the family home in Kloten, son of the late John and Mary (Schneider) Hoerth.

Arthur met Georgene because his sister was friends with her sister. Arthur said he fell for Georgene as soon as he laid eyes on her. He proposed to her the night of her high school graduation. They were married on April 21, 1945, and they built a life together in Kloten, raising a family of eight children and running a dairy farm. Theirs was a story of steadfast love, loyalty, and perseverance. They spent their entire life at their Kloten farm; there were never summer family vacations or travel. Fun was family, church, and firemen’s picnics, then always back to the farm for milking. In the winter, it was ice fishing and sturgeon spearing on Lake Winnebago, but then back home again for chores and milking. If dance is an expression of love, then their love was amplified in their enjoyment of dancing.

Arthur and Georgene taught strong work habits, personal ethics, and community service, setting examples for their children and generations to come. They were members of the St. Elizabeth Church in Kloten where Arthur served as treasurer, sang in the choir, and secretary/treasurer of the cemetery association, while Georgene was a member of the Christian Mothers Organization. Arthur was chairman and assessor for the Town of Stockbridge and a member of the volunteer fire department. He also served on the Chilton Co-operative Board and was a member of the Hayton Investment Club. He also enjoyed many years with Georgene as part of the German American Club. Later, after two of their sons partnered in the farming operations, they were also able to enjoy trips with the Jerry Schneider band and a trip to Germany.

A Mass of Christian Burial will be held at 11:00 am on Saturday, December 17, 2022, at St. Mary of the Seven Dolors Catholic Church (120 Davis St.) in Stockbridge. Friends may call from 9:00 am until 10:45 am at the church on the day of service. A committal service will take place at St. Elizabeth Cemetery in Kloten following the funeral ceremony. To watch Arthur's funeral service live, watch a recording of his service in the future, see a memorial video in his honor, or view flowers given to the family, please click HERE

The family extends special thanks to staff at Calumet Medical Center and Calumet County Hospice for their care of Arthur.

In lieu of flowers a memorial fund has been established in the name of Arthur Hoerth.
So sorry for your loss. You are in my thoughts and prayers. I went to school with Laurie. My brother, Gerard, went to school with Judy. God's peace,
Carol and Pete Mueller

My sympathies to the Hoerth family at this time of loss. No matter what age, the lose of a spouse, father, grandfather, great grandfather is unexpected and hard to believe. With the Lord's help we will overcome the grief and remember Art's life

Francis Schneider (His mother and my grandfather wer siblings) - Dec. 18, 2022

Our thoughts and prayers for the entire Hoerth family