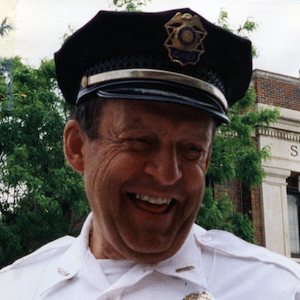 Daniel J Albedyll
Chilton, WI
Daniel J. Albedyll, age 88, of Chilton, died on January 24, 2023, at St. Elizabeth Hospital in Appleton. He was born January 18, 1935, son of the late John and Ann Albedyll. After high school he joined the U.S. Army where he served as an MP for two years.

In 1957, Daniel was promoted from police aide to patrolman in Milwaukee. On May 4, 1957, he married Catherine Millay at St. Augustine Catholic Church in Chilton. In 1961 the couple moved to Chilton where Daniel was hired by the Chilton Police Department. By 1967, Daniel had become Chilton’s Chief of Police and served until his retirement in 1997.

During his career, Daniel was a proud member of the Wisconsin Chiefs of Police Association where, in 1987, he was elected president of the association. Daniel was honored as the Chilton Citizen of the Year in 1997.

His life of service to the community extended far beyond the police force. He was very active in various youth programs including the Chilton Youth Center which he helped run. He also assisted in various levels of the Chilton football program from pee-wee to varsity for more than 45 years. During his lifetime, Daniel was a member of various organizations including the Knights of Columbus, the Optimist Club, the American Legion, the Jaycees, and the Kiwanis Club, among many others. He was also a member of the Good Shepherd Parish where he served as a council member and an inter-parish council member.

His family was his pride and joy, and he loved spending time with his children, grandchildren and great-grandchildren at the family cabin. He also enjoyed hunting, fishing and traveling annually with various other Chiltonites to Canada. He was always up for a game of cribbage.

Daniel was preceded in death by his wife, Catherine; and his parents John and Ann.

The family would like to extend a special thanks to Larry Seipel, Gary Dlugopolski, Donny Kampfer, and Tom and Candee Roberts for their continued friendship with Daniel over the years.

In lieu of flowers the family will donate funds to the Chilton Youth football program.

To watch a memorial video in honor of Daniel, or to view flowers given to the family, please click HERE
Dan & Catherine were a wonderful couple! Love the picture of your Dad! That‚Äôs how I remember him. So sorry for your loss! Prayers & Hugs Albedyll family.

Dan was always there to assist and give advice. He will never be forgotten

My sincere sympathy to JoAnne and family. Love the photo! That‚Äôs the Dan Albedyll I remember!

That smile says it all about Dan! A life well lived. Our deepest sympathy to all of you. He's enjoying time with Catherine again!

Condolences to all the families. We cherish our memories of Uncle Dan and Aunt Catherine with our trips to Wisconsin or their trips to Montana. We enjoyed a couple trips together to Laughlin, Nevada. We were there on the 24th. May the many happy memories bring you all some peace